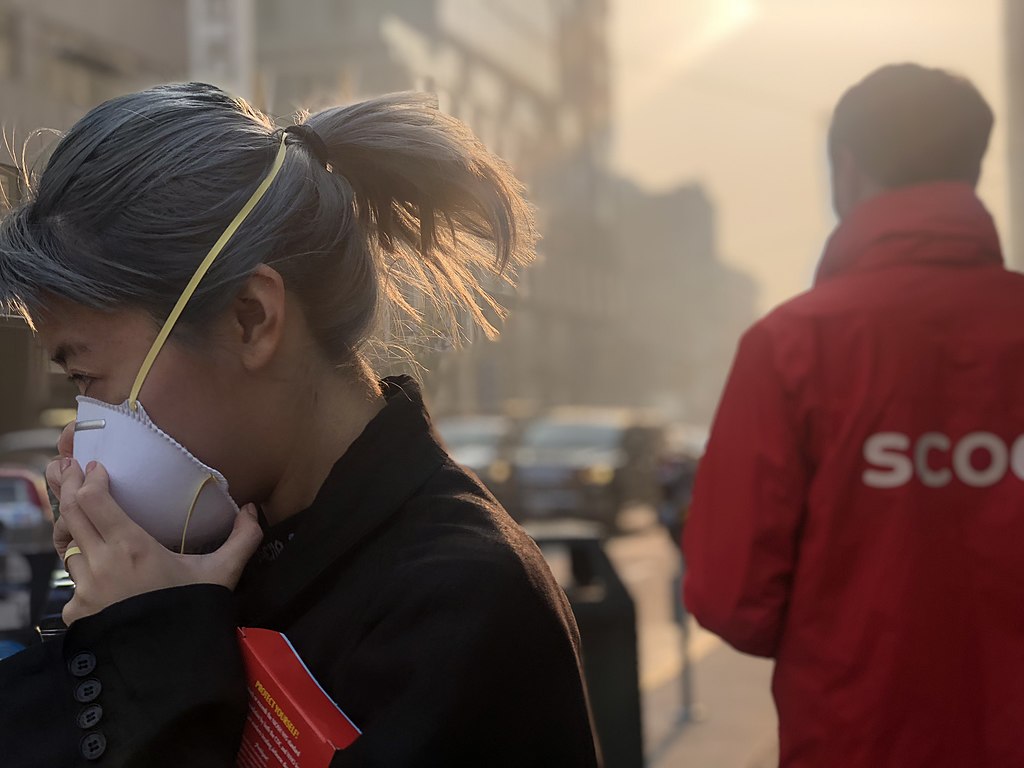 The coronavirus pandemic has forced people throughout America as well as other countries all across the world to cover their faces with face masks, plastic shields or other forms of protection. But the reality is that the SARS-CoV-2 virus is not the only airborne health hazard that Americans are threatened with. According to the State of the Air report, recently released by the American Lung Association (ALA), roughly half the American population inhales polluted air as they breathe in life-giving oxygen. These harmful air pollutants not only pose a general health risk, but studies indicate air pollutants may contribute to COVID-19 deaths. Unless a concerted effort is launched to curb greenhouse gases responsible for climate change and ensure clean air protection measures remain in place, the number of Americans exposed to harmful air pollutants is likely to rise further still.

The data for the latest State of the Air report was collected between 2016-2018 by government agencies across the US. Atmospheric temperatures during the three year time span when the data was recorded were three of the hottest years on record, fueled by global warming. According to the report, during this period nearly 5 out of 10 people, or 45% of the American population, reside in areas with harmful particulate matter or ozone pollutants (smog), 20 million of whom live in areas where they are exposed to airborne particulate matter throughout the year.

â€œWe attribute that to two factors: climate change, with hotter temperatures leading to drought and wildfire, and the Trump administrationâ€™s efforts to roll back some environmental regulations and a lack of enforcement of others,â€ Paul Billings, the national senior vice president for public policy at the American Lung Association, told Sierra Magazine. â€œIn this yearâ€™s report, weâ€™re starting to see some of the impact of that lack of enforcement coupled with climate change, leading to these increases overall.â€

â€œFor particle pollution, western communities are on the front lines of the impacts on climate change,â€ Billings said. â€œThe hot, dry conditions have led to drought and wildfire. Thatâ€™s why weâ€™re seeing so much of this impact there.â€ The nature of Californiaâ€™s topography makes it particularly vulnerable: the mountains, basins, sunshine and heat, as well as where the ocean holds pollution. As a result, Los Angeles and the Central Valley have suffered for decades with high levels of pollution.

Particulate matter is associated with various health impacts, including coughing and wheezing, as well as breathing difficulties, in otherwise healthy adults. It is also linked to lung disease/cancer, strokes, heart attacks, and dementia, as well as negative neurological health impacts. People most likely to impacted by harmful air pollutants include children under the age of 18, senior citizens, people of color and low income communities.

In the age of COVID-19, exposure to atmospheric pollutants is particularly worrying. A recent Harvard study that assessed the link between exposure to harmful air pollutants and COVID-19 mortality in the United States has shown that exposure to high levels of particulate matter can increase the likelihood of death resulting from COVID-19 complications. This is an area of concern, considering the State of the Air report indicates that millions of Americans are exposed to dangerously high levels of particulate matter on a daily basis.

However, Billings is quick to point out that the long-term trend is more positive when one compares the current air quality data with that from 20 years ago, which can in part be attributed to the introduction of the Clean Air Act. For example, 20 years ago Los Angeles experienced 70 more days where pollution was high. Overall, the data shows that emissions for most cities have been reduced by more than 70% since 1970.

â€œThe Clean Air Act is a true public health success story,â€ Billings said. â€œWhen it was passed in 1970, you literally couldnâ€™t see across the street in some cities. Air pollution was victimizing people all over the United States. Thanks to that law, weâ€™ve seen dramatic improvements in air quality. But weâ€™re still not clean enough. The promise of the Clean Air Act is air that is safe and healthy for everyone to breathe, and sadly, as our report shows, we are far from that. Thatâ€™s why we need to enforce and implement the Clean Air Act."

â€œWhat weâ€™ve seen in the last few years is the Trump administration taking steps to undermine and weaken enforcement and roll back regulations that provide significant benefits to public health by reducing emissions,â€ Billings said, â€œwhether itâ€™s the push to weaken efforts to clean up methane emissions from oil and gas operations, which is a big driver of climate change, or the recent efforts to roll back the clean car standards, which address carbon dioxide.â€ The EPA recently took steps to undermine the Mercury and Air Toxins Standards and has rolled back efforts to clean up toxic emissions from coal-fired power plants. â€œWe see this pattern again and again, with this administration trying to undermine and weaken the Clean Air Act and further delay heeding the promise that Congress made to the American people decades ago: to provide air that is safe and healthy to breathe.â€

As the climate gets warmer, the Trump administration is rolling back regulations that were put in place to ensure the air we need to breathe in order to survive is not going to kill us, Billings encourages the public to demand that the government does more to ensure their health is protected.

â€œThe COVID-19 crisis should be a wake-up call for the public to demand air that is safe to breathe,â€ he said. â€œAir is life. We canâ€™t survive if we canâ€™t breathe. Clean air is fundamental and basic to who we are as a people, as a civilization. Weâ€™re living in trying times right now that happen to have created a moment when we are not taking clean, safe, healthy air for granted. While people should stay at home, practice social distancing, wash their hands, and follow the advice of CDC and local and state health departments to protect themselves from COVID-19, the public should also demand that their local, state, and federal agencies protect them from air pollution. No one should suffer from an asthma attack or die prematurely due to air pollution. This is preventable. We have made tremendous progress. Itâ€™s time to finish the job.â€