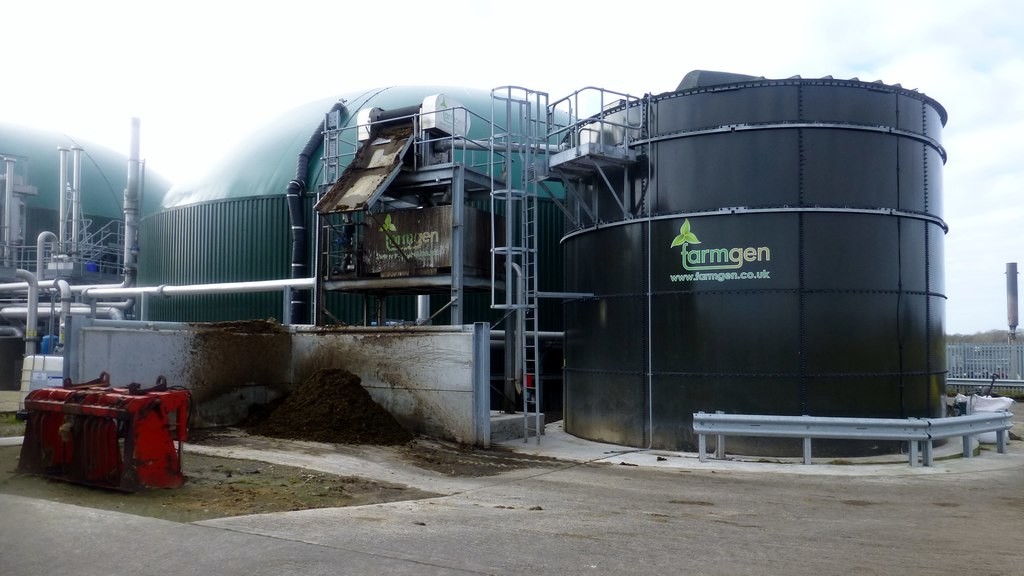 Carr Farm used to be a dairy farm but since 2011 it has been the site of an on farm anaerobic digester plant which is fed with silage, potatoes, fodder beet, cattle manure and poultry litter as some of the ingredients to produce gas which is burned onsite to produce green electricity. The liquid and dry digestate is then put back on the surrounding fields to crow more crops.[/caption]

Organic waste material can be diverted from a landfill and used as a feedstock in anaerobic digestion systems to produce biogas that serves as a valuable alternate source of energy. Lets take a closer look at how this process works and the products that are produced as a result.

How does Anaerobic Digestion Work?

Anaerobic digestion is a biological process whereby microbes break down organic matter (material that originates from a plant or animal) in a confined oxygen-free environment.

There are a wide range of organic materials that can be processed in an anaerobic digester, including: manure from animals; food waste; fat/oil/grease; organic residual materials from industrial and agricultural processes; and wastewater sludge (biosolids).

Regardless of system design or the type of organic feedstock that is used in the anaerobic digester, the principals and process followed is generally the same.

What Does the Anaerobic Digestion Process Produce?

During the anaerobic digestion process, microbes consume the organic material inside the oxygen-free digester, breaking them down, while at the same time producing biogas consisting primarily of methane and carbon dioxide, with traces of water vapor and other gases. As methane gas is highly combustible, and therefore the main component of natural gas, the other gases (CO2, H2O, etc) produced during the digestion process are removed, leaving the more valuable methane behind.

Biogas is the key product produced during the AD process. This natural gas is a renewable source of energy that can be used in many applications, including: powering engines, producing heat and electricity, fueling boilers/furnaces, running biogas powered vehicles, and supplying domestic and commercial consumers with natural gas.

Ultimately the quality of the biogas produced will determine how or where it will be used and how efficiently it will be used. If the unwanted gases mentioned above are removed from the biogas, its energy value will be considerably higher, making it suitable for use in sensitive engines that are more efficient. Inferior quality biogas containing trace contaminants is generally used to power more robust engines that are less efficient, for example internal combustion engines.

Biogas that is treated further to meet pipeline quality standards can be distributed to consumers via the natural gas pipeline. It can also be specially treated and used as compressed natural gas (CNG) or liquified natural gas (LNG), both of which are sustainable fuels that can be used to power vehicles.

At the end of the digestion process the microbes will have broken down the organic matter, which now consists of a soft wet sludge, or digestate, that is typically separated into liquid and solid forms. Both forms contain high levels of nutrients needed for plant growth, and therefore can be applied to agricultural fields and used to fertilize crops. Digestate can also be processed into commercial soil enhancing or fertilizer products and sold by the bag to gardeners around the country. Besides the value it offers as a soil amendment and fertilizer, the solid digestate can also be used to make other products, such as flower pots and livestock bedding.

As we can see, organic waste is in fact a valuable resource when it is processed in anaerobic digester. Not only is organic waste kept from the landfill, where it will produce methane that contributes to climate warming, but this methane, which is produced by the same process, is captured to provide a renewable source of energy that is both clean and sustainable.