Keeping backyard chickens is a growing hobby and business for people living in both rural and urban areas. As this trend grows, more and more chicken owners are starting to recognize that chickens have unique characters and make wonderful pets. Some people are now even keeping them as house-pets. But while having a pet chicken waddling around the house may be a novelty, there is a downside: how to prevent â€˜accidentsâ€™ when nature calls? Now, thanks to some creative entrepreneurs, the problem of how to deal with the inevitable (chicken poo) has been solved with chicken diapers. Yes, I kid you not, chicken diapers

Considering that chickens are easy to keep, and ever so endearing, it is not surprising that they are becoming more popular as house-pets. But chickens poop a lot â€” as much as a dozen times a day in fact. So chicken poo can quickly accumulate in the home, which obviously poses hygiene issues if not dealt with appropriately.

Pampered Poultry, pioneers of poultry fashion, have been designing fashionable chicken diapers since 2010, and with more and more interest being shown in their product, they have expanded their range to include other fashionable chicken gear too. The company supplies chicken diapers and other chicken gear to customers across the country, including clients living New York City who have taken the pet chicken thing a stretch further by keeping apartment chickens. 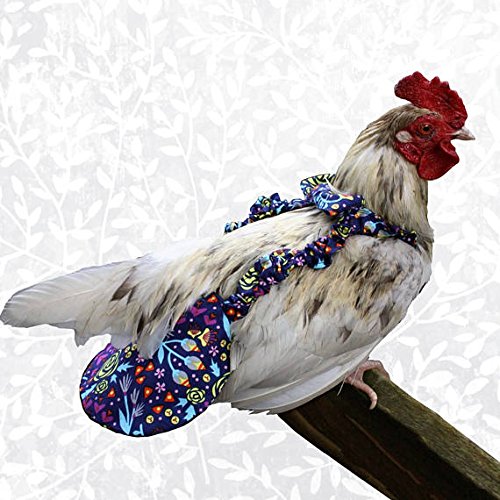 Preventing accidents by collecting chicken poo in diapers is one thing, but what to do with all the excrement collected? Chicken poo makes an excellent fertilizer, so no matter whether you are living in a rural or urban area, if you have a veggie garden, this can be a valuable commodity. Instead of discarding the poo in the bin, or flushing down the loo, rather throw it on the compost heap or dig some into your garden beds to improve your soil and enhance the growth of your crops.

Chicken poo is an organic material, and as such, it can be digested in an anaerobic digester to produce a methane rich biogas. This prevents methane emissions that would otherwise be released into the atmosphere as the poo breaks down on a landfill or wastewater treatment facility, and provides a valuable source of renewable energy instead.

Keeping chickens is not only fun, with the appropriate gear, they can toddle around your home and become endearing members of the family. Keeping a pet chicken or two will not only ensure a ready supply of organic free-range eggs, but can also enrich your garden or contribute to biogas production. They are not only a productive member of the family, but can also be considered a sustainable pet at that.