Causes & Impacts of a Landfill Fire 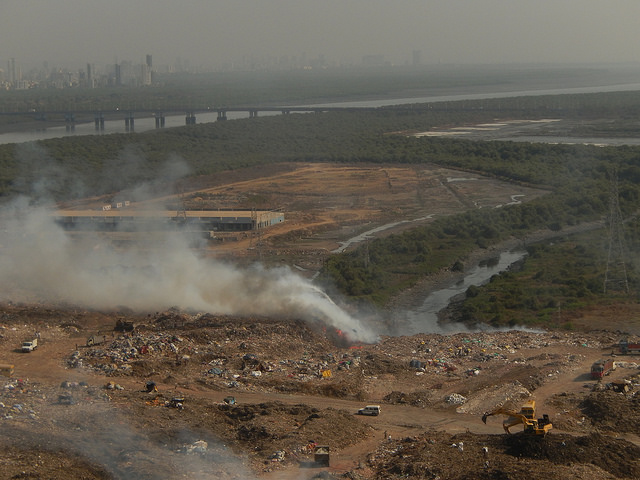 A recent landfill fire in Mumbai, India, which was clearly visible from space, highlights the impact that atmospheric emissions from such a fire can have on the environment and human health â€” in terms of both greenhouse gases and airborne particulate matter.

Due to the extensive range of substances and materials present in a landfill, landfill fires pose a particular health risk, as they can release hazardous fumes when these materials and substances ignite. The smoke from Mumbai's landfill fire engulfed India's most densely populated city, resulting in dense smog containing high levels of pollutants that drastically reduced air quality, posing a health risk to human health. As a result of this fire, 74 schools were temporarily closed until air quality improved. 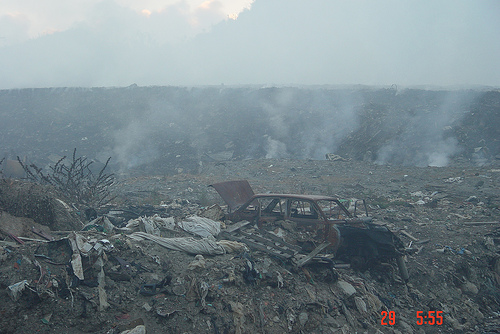 An underground landfill fire can occur when air infiltrates a landfill. Air can be drawn into a landfill in one of two ways: advection or diffusion.

There are several factors that can allow air to enter a landfill by advection, including:

If a landfill is managed correctly and is properly maintained, infiltration through most of the above mechanisms can be avoided. However, infiltration due to excessive vacuum at active gas wells may prove more of a challenge to control. Systems commonly used to control gas emissions, such as gas flares, are most efficient when methane concentrations are greater than 25%. But in order to maintain these concentrations gas collection needs to be fairly aggressive to avoid rogue emissions to the atmosphere. However, this can allow air to infiltrate the landfill, especially at well seals of active gas wells, which will in turn dilute the concentration of methane in the landfill gas (LFG).

Well seals are typically constructed from hydrated bentonite, however, prolonged dry periods with no rain can cause the bentonite to dry out, resulting in well seal failures that allow air to infiltrate the upper layers of waste in the landfill. If this is not corrected, the oxygen content in the landfill will gradually build up over time, penetrating the deeper layers of the landfill.

Oxygen can also enter a landfill by diffusion â€” it can permeate the permeable cover material on the surface that separates the waste in the landfill from the surrounding air, particularly at older landfills that have a lower methane generation potential. Landfills situated in arid regions are particularly vulnerable to oxygen diffusion via the cover material, as the material is more porous and thus has more airspaces between soil particles to allow air to pass through.